You could cut the oestrogen with a nail file as you entered the Sydney Opera House Theatre two weeks ago. As a kick-start to International Women’s Week, the House put on a series of talks titled “The F-Word”. This day of feminist discussion saw Naomi Wolf and Germaine Greer give individual talks, and was rounded out by a Q&A style debate featuring these two prominent feminists joined by journalist Clem Bastow and war correspondent Eliza Griswold.

Waiting for the talks to begin I thought over all the reasons why I chose to come. I was here to be inspired about feminism. I have noticed many young women don’t consider themselves feminists. There are two reasons for this. Firstly, the word ‘feminism’ is somewhat misunderstood. To some, it conjures up some strong negative connotations of extreme radical man-hating activists, which are rejected by young women.

Secondly, and perhaps more significantly, young women have not had to fight for the same labour rights and lifestyle choices like they did in the past. They take these options for granted, and rightly so. However, since they don’t consider being without this freedom, ‘feminism’ is not always something that is on their mind. That being said, anyone who wants equal opportunity for women around the world IS a feminist. Feminism is unequivocally still relevant and the movement needs to continue, but how can we keep it moving?

Over 1000 people (about 10% men) missed this stunning Sydney day to attend the talks. .

As I inched my way across to my seat in the Opera Theatre that inevitable question flashed across my mind; arse or crotch in their face? (I usually choose arse, but today went for the crotch, it seemed apt.) I found my seat and got my feminist nerd on with notebook, pen and enthusiasm to learn. It was like being back at uni, but with more shawls and people listening, and less Ugg boots and hangovers.

Naomi Wolf was up first with her topic ‘Next Steps for Feminism’. She coined the next movement in feminism as “Enlightenment Feminism”. By this she refers to being free; free to speak, free to worship and free to govern. Wolf described a return to the matrix of universal human rights. While I appreciated what she had to say, I also felt she was missing something. Her topic was ‘next steps’ yet she merely introduced her new theory. While it was great to hear I, and maybe a lot of the other people there, were keen for more practical ideas and solutions.

Germaine Greer utterly owned the stage next to discuss feminism in the global context. You could feel the energy in the room as women clapped and even gave her a standing ovation with anticipation at what she had to say. And she delivered.

Greer’s lecture focussed on different situations women face around the world and the fact we can’t judge their value systems until we totally understand them; something which cannot be done until you connect with women living in these countries and witness their daily life. Greer’s key message was that all women, no matter your situation, have veils. And that veil, be it lipstick or a burqa, is “1000 different things to 1000 different women”. 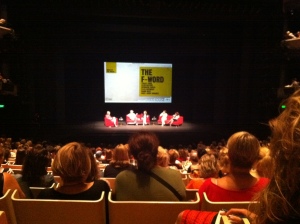 Inspiring panel at The F-Word Forum

By the third session the crowd was buzzing. I’m sure the $10 glasses of chandon they were serving at the bar may have played some role in getting tongues wagging. Throughout the Q&A session a whole range of issues were touched on. I couldn’t possibly do justice to try and explain them all in this post but they included: abortion, pornography, sexual double standards, domestic abuse, female cutting/circumcision, and female misogyny and insecurities. And the important thing about these issues is that while they are related to situation’s women face, they affect everyone and are the responsibility of the community. Improving them improves life for all, which means anyone who wants to make the world a better place this way is a feminist.

Western feminism was discussed as well as feminism around the world. As Greer said, in some countries, feminism is a life or death situation. Eliza Griswold made some very interesting points about women in Afghanistan and pleaded with us to listen to these women and not let them be closed off for another 50 years.

When questioned by a 20 year old member of the audience on how to navigate being feminine while also being successful Bastow commented: “being feminine is not an anti-feminist stance”. Which I think is a great reminder and reassurance to young people. You don’t have to give up your feminity to be a feminist. Greer followed this up with the suggestion to, when looking for a partner, “be less needy… be challenging and difficult” while at the same time being yourself.

As it neared towards the end of the discussion it was clear the audience was craving a bit more practical direction as to what’s next for feminism. What can we do, what should we do, and how do we do it. Bastow noted that there is a lot happening online through blogs and social media; they are a great place to start. And Greer suggested we all join the Country Women’s Association as “they are ripe for change”.

These two practical things are great suggestions, but I still felt something further was missing. All these enthusiastic and intelligent people in one room we were keen for more direction on how to ‘do feminism’. I realise it is up to every individual to make the difference they can, but I have no idea where to start myself. Feminism appears to be floundering with people theorising it and bemoaning its downfalls and shortcomings. We know there are challenges and people’s mindsets need to change in order to resolve some of these issues. But what is next?

I can’t really answer that at the moment. Maybe just being more aware of the issues is a start and the next steps will reveal themselves in time. Will this attention and awareness bring about change? I don’t know. But what I will remember for next time is to get to the toilets quickly afterwards because wow the queue for the ladies was long!

Are you a feminist? Do you have any ideas of how to ‘do feminism’? What would you like to see changed the most? What’s next for feminism?

26 thoughts on “Feminism: It is still relevant, but what next?”