For those of you that don’t know, Tinder is a dating app with the aim to “discover those around you… and connect you if you’re both interested”. Based on your Facebook data the app recommends matches which you can like or pass. If you both choose ‘like’ then you are matched up and can message each other. Your profile consists of up to five photos, your age, any mutual friends, and a tagline. Basically it’s the simplest, most superficial form of internet dating: it’s speed-dating of the internet.

Two nights ago my male housemates, who both use the app, convinced me to join so they could “check out their competition”. After connecting my phone to the Apple TV the three of us went through my potential suitors, the boys shouting at me to swipe left (Nope) or right (Like) to guys they thought were cool. Things got judgemental… like Year 8 High School bitchy. We argued, we laughed, and we were down-right scared.

I’m worried this guy is only 9 miles away…

Now, having been on there for two days (and in order to justify my time spent on the app) here are my recommendations…

DON’T post of photo of you holding a gun. It’s concerning that I even have to say it, but I’ve seen at least 5-10 photos of Tindee’s holding guns. Don’t post a pic of you at a shooting range, or pointing a gun at your head, or even in a semi convincing dress-ups. Guns = no.

Just one of many…

DO post a pic of your dog… it may just get you over the line.

DON’T post numerous shirtless/bikini pics. Unless that is what you’re into, in which case… go right ahead. (Nope).

DO realise that if you choose a photo just because your arm/cleavage looks good, we know that was why you posted it.

DON’T post a pic of yourself cropped next to Daniel Criag, Barack Obama, Hugh Jackman etc because you think you look alike… you only look like a jerk.

DO post pics of you having fun with your besties where everyone is smiling and having a great time. This way we know you have friends, or at the very least some mild acquaintances.

DON’T post model shots. I don’t care if you are a part-time/full-time/out-of-work model. You look like a douche.

DON’T post selfies. A photo of you taking a photo of yourself in the mirror is the worst. You may think your rig looks ripped, but I think nope.

ESPECIALLY NOT SELFIES OF YOU LYING ON A BED!

DO be aware that if you post pics of yourself with a child, everyone will think it’s your kid.

DON’T post a bunch of photos of different close-ups of your body: a half face with sunnies on, feet in the sand, a random arm shot. We aren’t putting together a fucking jigsaw and just what the hell are you hiding anyway.

DO remember your audience. Your buddies may think shots of you doing motorcross sports are impressive… but… NOPE!

DON’T write that you’re looking for a woman who can make you a sandwich. Besides the fact it’s unoriginal and boring, don’t you want to aim a little higher? Like someone who can fix you gourmet eggs Benedict, cook a mean roast, or bake some sweet desserts? Srsly. Even I can make a sandwich… and I burn pretty much every piece of toast I come into contact with.

DON’T post that Marilyn Munroe quote as your tagline. It’s not sassy and empowering like you think it is. Using someone else’s quote to express your individuality? NOPE! 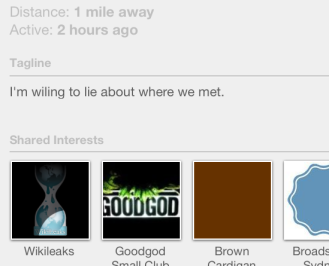 DO check the mutual friends before you connect. If they are friends with all six of your ex’s things could get awkward.

DON’T choose couples photos of you with your ex. Clearly you aren’t over them yet.

DO post more than one photo of yourself and make sure they are different photos. No one wants to date a person that accidentally put the same picture three times and can’t work out how to change it.

DO post photos of things you like doing, silly photos and awesome dress ups – except that terrifying clown costume, that’s a NOPE from me.

DON’T post too many pics with other people in them, we aren’t playing Guess Who and AIN’T NOBODY GOT TIME FOR THAT!

I could analyze this app in how it’s a reflection of the shallowness and short attention span our society has, but that wouldn’t make me look very cool and seems like it would take a bit of thought and time. Besides, after a month well all have run out of matches and be onto the next app… Snapchat anyone? Lolz.

8 thoughts on “The Do’s and Don’ts of Tindering”