I don’t want to be smug or anything, but I’m on a month long European holiday. I’ve sunned myself through Croatia, yodelled through Austria, and am about to hit up Germany before moving onto the UK. Ok I lie… the whole point of going on holidays is to be smug about it to everyone. That and to experience different cultures and have a pretty awesome time doing it – I suppose. But my smugness really came back to bite me on the flight from Sydney to London. Here’s what happened.

Flying anxiety, take-off delays and knowing I had a middle seat didn’t suggest a breezy flight, but the promise of what I was heading towards kept me cheerful. Quite a few screaming children shared our boarding gate and I prayed to not be seated near them. When we eventually boarded I made my way to my row, hoping I’d have friendly companions.

Mr K was already positioned in his window seat, which he filled out without an inch to spare (there’s one armrest down). Mumbling a few sentences through his walrus like moustache he seemed friendly enough. Then, to break the ice in true “me” style, I dropped a whole bag of stuff everywhere which he helped me pick up off the floor. This would have been sincerely appreciated, had he not repeatedly landed his head in my crotch. Sadly this was not the last invasion of my body space during this flight.

When Mr H arrived I sensed trouble. His forehead wrinkled into his round spectacles as he nattered away to the flight attendant. A feeling of dread came over me as I realised he was ‘chatty’.

As I settled in to read my book, Mr H settled in for a good chinwag. To break the ice he enquired what each and every one of my toiletry items was used for (that’s the last time I use a see-through bag). Leaning over the armrest into my face he declared, with a creepy half wink, “So you’re a high maintenance girl, eh?” There went armrest number two.

Following this ice breaker the conversation rolled on, topics included: unemployment in Asia (complete with a variety of wrong facts), how hot water doesn’t have a taste (unlike coffee or tea); how much he likes Betty Boo (complete with showing me the Betty Boo wallet which he originally bought for his daughter, but kept for himself); and a demonstration of his various travel gadgets (including a torch than can hang on his ear if needed). And we hadn’t even taken off yet. 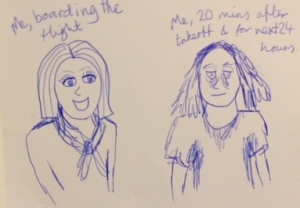 As Mr H remained oblivious to my attempts to stop talking and read /sit quietly/nap I decided to pull out my aeroplane blanket.
“Have you got many of those?”
“Um, no… “
“I’ve got heaps…” he said proudly. “I keep them in the boot of my car.”
Suddenly I knew him, wearing his Betty Boo pyjamas and equipped with key ring torch he would bunker down in the boot of his car with his prized stash of thieved aeroplane blankets. “So soft and fluffy” he said dreamily as he touched the edge of my blanket. Later I noted him stuffing his unused blanket into his backpack.

It was like I was at a party stuck in conversation with a friend’s talkative drunk uncle on one side, and a silent personal space invader on the other… all the while scanning the room for an escape. Only there was no escape. There was only my ½ metre squared, armrest-less area in which I would spend the next 15 hours sitting.

With Mr K’s hand flopping in my lap every time he fell asleep, together with Mr H getting all up in my grill with his bad breath and life lectures; the next 15 hours played out painfully slowly. At various times I noted a baby crying: what I wouldn’t have given to trade places now! 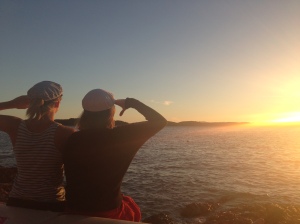 I guess the end result was worth it…

Do you guys have any horror transit stories?