It’s beginning to look a lot like I AM GOING TO SHOVE THOSE CHRISTMAS BAUBLES UP YOUR CHIMNEY IF YOU DON’T BACK THE F*** UP, Santa! You too Rudolph, if that even is your real name…

Seriously get out of the way, scrooge is coming through with big plans to hate, hate, hate all over your Christmas.

Turning 18, becoming fully self-dependent, purchasing a vacuum cleaner… all things we use to classify the transition to adulthood – until now.
Somewhere in between last years list to santa and this post, things have changed. I have realised my true self and am emerging, like a butterfly from its cocoon, to spread my hatred filled wings all over your fake snow covered houses. Hear me, at last a fully fledged adult, share my feelings of detest around this so called holiday. 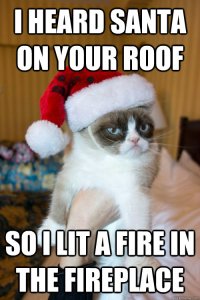 As a child I could never understand why my “46 sleeps till Christmas!” countdown announcements were met with a shudder and a groan from my mother. Now I know. And the truth is as cold and sobering as running out of beer on December 25th would be.

Calling Christmas a ‘holiday’ is like labeling the wolf in a night gown ‘grandma’… You’re expecting baked goods, presents and old person scent… but in reality it is a wild animal wanting to rip your throat out and feast on your human meat. Maybe my analogy is under-cooked, but, like your nans turkey, you will eat it if you know what’s good for you!

I’ve never quite understood the pre-christmas work stress until now. What’s that – you’d like 4 projects completed before the end of the year?! No worries, I’ll just cram about 2 months of work into one – I wasn’t planning on sleeping this month anyway… If you can even call December a month, it’s more like 3 weeks at best.

In between the late nights, end of year social functions are in abundance. There we hover, cheese cubes and Jatz in one hand, one drink too many in the other… with nothing to talk about except how much work we all have waiting for us at our desks. And so help me, if I get another shitty candle in the office Kris Kringle I am coming for you frosty… YOU better watch out!

Oh yes. The presents! Shelling out a small fortune on gifts you feel obliged to give, knowing that they will probably sit in a cupboard until spring rolls around and they are packed up for charity. All for the sake of not wanting to have nothing to give in return when they hand you something you have no need or want for. Such a waste.

You know what else is wasteful? Street after street lit up like a ****** Christmas tree! You may as well have just slaughtered a polar bear, you Christmas joy-bringing freaks. You probably make your own cards and give gifts of homemade rocky road too. You disgust me. *spits on ground* 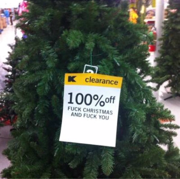 “But Christmas is all about FAMILY!” you coo… bah humbug! It’s all about family FIGHTS… disputes over who invited who, who bought who a set of scales as a present, who didn’t help with the dishes, who forgot to bring the bread rolls, who’s taken an AVO against who, the list goes on…

“But what about the CHILDREN!?!” you cry… Yes. What could be more traumatising than your parent – your world, your everything – placing you on the lap of a strange man with a fake beard and whiskey breath, and then leave you – desert you! – while bright lights flash continually and a Christmas elf waves a toy in your face telling you to smile. No wonder little Ned is falling behind in finger painting.

And then there are the crazed bloggers who have their tinsel in a twist over something which everyone else adores and celebrates. They hide in a dark room, tapping away on their overheating laptops, churning out Christmas hate blogs and angry letters of complaint about the queues in the post office. They are by far the worst. Don’t they know it is a day off and you get to stuff your face with treats?

Bah! How did something I used to treasure more than anything else become so dreaded and tedious. Is it a signal of what’s to come? The death of that little part of your soul that you don’t notice is gone until one day you wake up and think “how did I get here”?!?

Or maybe I just need a holiday.

Screw it. I’m going to find some small children to tell them Santa is bullshit made up by their parents to control them.

A pox on all your gingerbread houses.

2 thoughts on “Bah Humbug! Down with Christmas!”