Controversial allegations have come to light that suggest senior executives at Vegemite created peanut allergies in efforts to reclaim some of their lost market share. A series of leaked emails allege operation ‘Down with P: V on Top’ was an ongoing take-down strategy that aimed to get peanut butter banned from schools and force parents to use allergy-friendly Vegemite.

One of the most shocking elements to the controversy was the alleged payment of school children to fake the illness and get the tree nut banned from their school. 9 year old Caleb had this to say “they offered me a Nintendo DS to hand in some letters to my school which said that I had such a severe peanut allergy that even if a kid who ate it breathed on me I could die. I was like ‘it’s 5 grand cash or I’m going to the feds’- I saw that on Law and Order once. What a bunch of dumdums. All I had to do was carry this epi-pen around with me. It’s not even real – it’s filled with chocolate milk!” Caleb demostrated that his epi pen was indeed chocolate milk by drinking some before getting back to the game of poker he was running behind the bike sheds.

Angry parents have gathered outside the Vegemite head office to voice their frustration. 39 year old Mandy described how peanut butter sandwiches were the only thing 7 year old Trixie would eat, and that they had been banned from her school. “I had to learn how to make sushi because of you!” she cried, before throwing a clump of peanut butter at the company’s front window.

Critics have asked – why now? And why peanut butter? It appears all is not rosy cheeks in the lunchtime spread market. While the two playground favourites have been friendly competitors for a long time, it wasn’t until parents started listening to Pete Evans and packing little Johnny smoked salmon and quinoa salads for lunch they have both faced dwindling market shares. A white bread sandwich with butter and vegemite was no match for ‘pasta’ made from zuchinni, activated almonds and kale – #cleaneating was the last straw.

A former staffer from V head office, who wishes to remain anonymous, had this to say “they were getting desperate – nothing was off limits. Local jam makers received threats and if they didn’t listen would find their strawberry patches mysteriously trampled of a night. They used spin doctors to spread the message that buying honey was a form of bee slave labour. They circulated this cartoon… 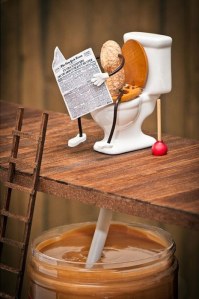 …then they went after parents who served fairy bread at kids parties – branding them ‘obesity defenders’. The jam and honey was one thing, but when they took aim at fairy bread I knew I had to get out.”

More recent documents suggest Nutella may have been the next target. A text from the chairman of customer engagement to the customer response director noted “Why stop at peanuts, I hear there’s something suss about hazelnuts– lol. J/k. LOL NOT JOKING!” This text was round out by the hazelnut emoji and several hand gesture emoji’s that are too obscene to print here.

The company declined to comment, except to declare that the claims were “nuts” and suggested the reporter was “scraping the jar” for news and should “get a real job to earn a proper crust”. Definitely something to consider.